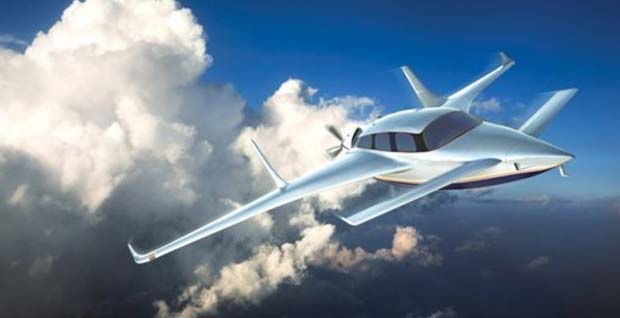 The Volta Voltare GT4 is made of carbon fiber with a carbon fiber pusher prop (in back) and a canard design, meaning the big wing is in back, the short wing in front.

A 900-pound lithium-polymer battery array—236 individual cells, each the size of a paperback book—powers the electric motor. The GT4’s hybrid powertrain, It can generate 600 peak horsepower [450 kW] and sustain 400 horsepower [300 kW] throughout flight, is lighter than the gas engine that the canard pusher airframe was originally designed to carry, so engineers added extra batteries to balance the craft’s center of gravity.

There’s also a 23-gallon gas tank for a supercharged 1.5-liter gasoline engine backs up the electric system. The gas engine kicks in when battery power falls to 25%.

On a 200-mile trip in a comparable four-passenger gas-engine private plane, you’d burn $80 worth of avgas, while the electricity to carry the GT4 200 miles would cost only $20.

If you want to see what owners of the GT4 are being promised, you can take a look at the Volta Volare reservations page.