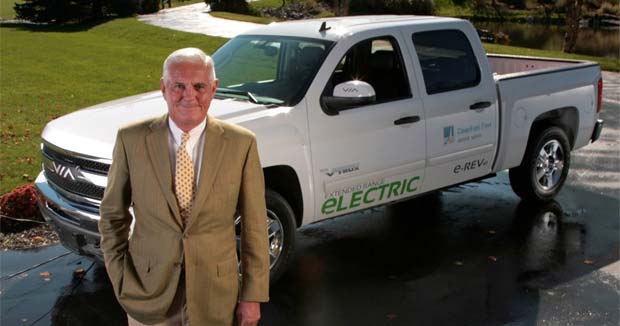 “VIA Motors has developed the first extended range electric powertrain capable of replacing the V8 engine. It was my great privilege to introduce the Chevy Volt, and it will be a great honor to introduce the world’s first line of eREV Trucks, Vans and SUVs by VIA Motors.”

Bob Lutz, who joined Via Motors board of directors in September, is turning his attention to mass production of more electric vehicles — first for fleets, then consumers.

VIA Motors fits its proprietary eREV extended-range electric propulsion system, dubbed VIA V-Drive, to existing General Motors vehicles in the hunt for greater efficiency. This plug-in powertrain setup is said to provide 30-40 miles per charge courtesy of a 24-kilowatt-hour lithium-ion battery.

When the battery is run down to its minimum state of charge, a 4.3-liter V-6 turns a 201-horsepower generator that helps move the truck, SUV, and van another 400 miles averaging up to 100 mpg. The tractive electric motor is rated for 402 horsepower and the vehicles can be configured for rear- or all-wheel drive.

VIA Motors, which grew out of Raser Technologies, has begun taking orders for 2012 for its extended range electric pickup truck from many of America’s largest fleets.

Production of VIA’s eREV pickup is scheduled to begin in 2012, with plans to ramp up production to 20,000 units per year over the next few years including the eREV SUV, Van and other large eREV vehicles.