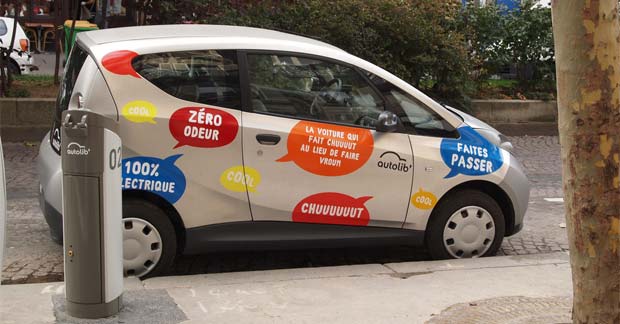 The move comes four years after the Vélib’ bike-hire scheme was introduced and will see 250 Bluecars on Monday. By next year it is planned that the service will see 3,000 electric Bluecars stationed at more than 1,000 locations across the city.

The Bluecar electric car is a collaboration of Italian car designer Pininfarina and French conglomerate Groupe Bollore, which which supplied the propulsion technology for its drivetrain.

The original Bluecar concept was powered by a lithium metal polymer (LMP) battery and was capable of a 155 mile range.

Some 2,000 people have already registered for Autolib’ accounts, and curious city officials from places like Guangzhou, China, or Rio de Janeiro have traveled to Paris to check it out.

Bollore says that at least 80,000 subscribers are needed for the program to be profitable.[wzslider height=”400″ lightbox=”true”]