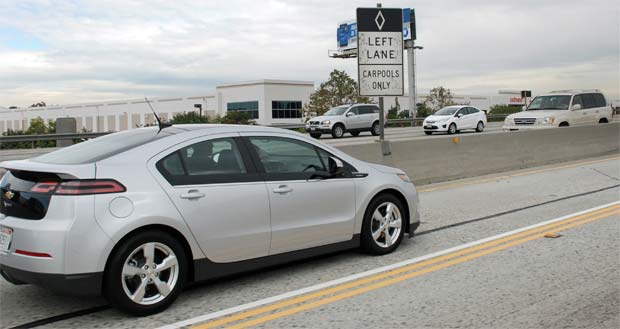 The 2012 Chevrolet Volt with Low Emissions Package that gives access to California’s High Occupancy Vehicle traffic lanes will be standard on all models sold in the Golden State early next year.

2012 Volt owners with the Low Emissions Package will be eligible to apply for one of 40,000 available HOV lane stickers issued to vehicles that qualify as a California Enhanced, Advanced Technology – Partial Zero Emissions Vehicle.

Additionally, the new Low Emissions Package makes the 2012 Volt eligible for owners to receive up to $1,500 in state rebates through the state’s Clean Vehicle Rebate Project. This incentive is in addition to the federal government’s $7,500 tax credit.

California has more than 1,400 miles of HOV lanes. Originally, these lanes were restricted to vehicles with two or more occupants to help minimize congestion. However, the state updated the program to allow single occupancy use of HOV lanes as a way to encourage early adoption of advanced, low emission vehicles.

The Volt has a total driving range of up to 379 miles, based on EPA estimates. For the first 35 miles, the Volt can drive gas-and tailpipe-emissions-free using a full charge of electricity stored in its 16-kWh lithium-ion battery. When the Volt’s battery runs low, a gas powered engine/generator seamlessly operates to extend the driving range another 344 miles on a full tank.

Volt owners have travelled more than 10 million miles since the vehicle launched late last year. Roughly two-thirds of those miles were powered by grid electricity.