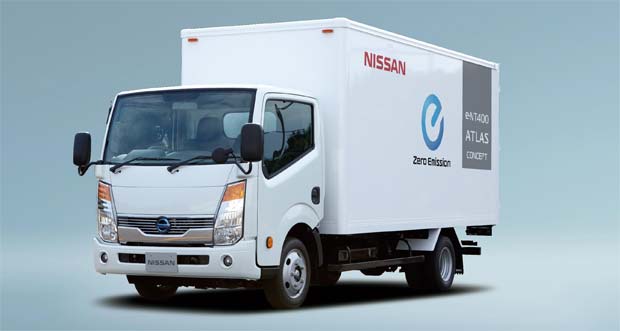 Nissan is exhibiting five models from its Light Commercial Vehicles (LCV) lineup, including trucks equipped with EV-related technology at the 2011 Tokyo Truck Show.

Nissan is working on the development and sales of zero-emission vehicles, including the electric vehicle (EV) Nissan LEAF, as well as battery development and production. From July 2011, the company began efforts to widen the EV range into the LCV sector, with the launch of global proving tests for the NV200 based EV.

Nissan is exhibiting trucks equipped with Nissan LEAF components and other EV-related technologies. Nissan is showing three trucks: the e-NT400 Cabstar Concept, the Cabstar Refrigerator Van with Li-ion Battery, and the Cabstar Power Supply Truck. In addition to the above models, Nissan is showcasing its wide-ranging line-up at the exhibition, including the NV200 Combi Taxi, the only vehicle in Japan certified as a Universal Design Taxi.

The NV200 Combi, which is the base model of the NV200 Taxi, was selected as the next-generation taxi for New York City in May of this year. This vehicle is a new generation of LCV that was developed to respond to the needs of customers on a global level and is already being sold in nearly 40 countries. Nissan aims to introduce various new LCVs in the future in order to meet the needs of its customers, and by fiscal 2016 to become the leading LCV manufacturer in the industry.

e-NT400 Cabstar Concept
The e-NT400 Cabstar Concept is an EV concept vehicle based on the Cabstar and equipped with Nissan LEAF components. Capitalising on its special characteristic of being totally CO2 and emission free, this truck can enter into areas where emission restrictions prevent the entry of conventional vehicles. Furthermore, the addition of a high-output, high-capacity lithium-ion battery and a high-performance electric motor have allowed for realising smooth, vibration free acceleration, an experience completely different compared to conventional gasoline and diesel-powered vehicles. Because there is no vibration resulting from mechanisms such as engine combustion, every aspect of driving offers a totally new feel, including when stopped, accelerating, and cruising. The vehicle also boasts a cruising range of 100 km in JC08 mode. Delivering technological innovation in concert with environmental consideration, the e-NT400 ATLAS Concept offers infinite potential for trucks of the future.

Cabstar Refrigerator Van by Li-ion Battery
The Cabstar Refrigerator Van by Li-ion Battery is the first of its kind in the world. Its refrigerating compressor operates on a combination of an electric motor with a lithium-ion battery power system developed by 4R Energy Corporation. The vehicle’s high-efficiency electric compressor makes it possible to keep the chilled/freezer compartments operating even when the vehicle engine is switched off, while also contributing to cutting CO2 emissions. In addition, getting rid of refrigerant piping in the chassis has allowed for reducing the risk of refrigerant gas leaks.

Moreover, this vehicle offers groundbreaking multi view monitor, which is an advanced version of the around view monitor modified especially for trucks. The new monitor provides a bird’s eye view of your vehicle on LED screen which is located on a rearview mirror area, allowing the driver to check to their rear and passenger side, areas that are difficult to see when backing up.

Cabstar Power Supply Truck
The Cabstar Power Supply Truck is installed with a 72kWh battery, the same as three Nissan LEAF batteries. This can provide power equivalent to that used at peak day-time periods by a 20-person office space (250㎡) over four hours. Recharging can be carried out at night during periods of lower power demand and then used at peak times during the day, thus alleviating pressure on the power grid at peak consumption times. In addition, this system can also be used as an emergency power supply during power shortages or outages.