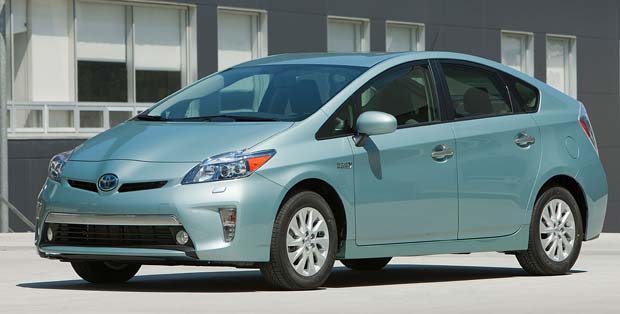 The all-new Toyota Prius Plug-in Hybrid will begin arriving in U.S. dealerships this October starting at $32,000 for the base model, without delivery, processing and handling (DPH) fee of $760.

The Prius Plug-in Hybrid Advanced will have an MSRP of $39,525. Both Prius Plug-in models are expected to qualify for a federal tax credit of approximately $2,500.

The all new Prius V and Prius Plug-in are the two newest hybrid vehicles to help make up the Prius Family. A fourth new member, the city-friendly Prius C, will launch in 2012.

Prius Plug-in
The third member of the Prius Family, the first-ever Prius Plug-in Hybrid, combines the benefits of the third-generation Prius Liftback’s Hybrid Syndergy Drive with extended electric vehicle (EV) range, in a package that is priced more competitively than any plug-in hybrid or pure EV on the market. It will feature a new Lithium-ion battery, which supplements the superior fuel economy of the Prius with an extended electric-only driving range of up to 15 miles at a maximum speed of 62 mile-per-hour. By Toyota estimates, it will deliver an estimated 87 MPGe (miles per gallon equivalent) and when operating in hybrid mode will achieve an estimated 49 MPG, providing drivers with great fuel economy without range anxiety. The Prius Plug-in also offers convenient charging times of only 2.5-3 hours using a standard 120V outlet or 1.5 hours using 240V.

Prius Plug-in Hybrid will be available in two models, the Prius Plug-in and the Prius Plug-in Advanced. The Prius Plug-in Hybrid model comes equipped with an abundance of standard features including heated front seats, Remote Air Conditioning System (which can run either off the grid while the vehicle is plugged in or off the battery like the third-generation Prius Liftback), a charger timer, EV/ECO/POWER modes, three-door Smart Key, Display Audio with Navigation and Entune1 and an integrated backup camera, LED Daytime Running Lights, 15-inch 10-spoke alloy wheels, enhanced Multi-information Display and much more.

Leviton, an approved provider of Level 2 (240V) home charging stations, has developed a residential program exclusively tailored for Prius Plug-in customers. The program will include the following:

Prius V
The first new member of the Prius Family, the Prius V, will meet the needs of growing families with active lifestyles while providing the same attributes traditionally found in the Prius DNA including Toyota’s Hybrid Synergy Drive. The Prius v will provide 58 percent more cargo space than the Prius Liftback, and at 34.3 cubic feet, it has more cargo room than 80 percent of the small SUVs on the road today. Despite the spaciousness of a family friendly midsize vehicle, the Prius V will deliver estimated EPA fuel economy ratings of 44 mpg city, 40 mpg highway and 42 mpg combined, the highest fuel efficiency of any crossover, SUV or wagon on the market.

The Prius V will arrive at Toyota dealerships in late October.