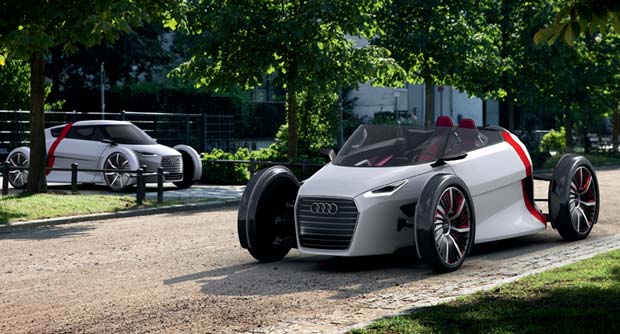 The 1+1-seat Audi urban concept, an ultra-light car for congested urban spaces, has been unveiled time at the Audi Urban Future.

The Audi urban concept features an all-new design that still has certain historical roots in the Auto Union racecars of the 1930s. They were well ahead of their time conceptually: they were extremely lightweight and their engines were mounted in the rear. Their large, open wheels also stood out from the chassis – another parallel with the modern show car.

The Audi urban concept combines elements of a racecar, a roadster, a fun car and a city car into a radical new concept.

Painted in Electric White, pearl effect, today’s technology study – 3,219 millimeters (126.73 in) long, 1,678 millimeters (66.06 in) wide, but just 1,189 millimeters (46.81 in) high – has a body on which all the lines are surging forward. The greenhouse is extremely flat. The roofline drops down like a wedge while the side window rises upward. The typical Audi tornado line gives the urban concept a strong shoulder.

Audi has also developed a second body variant as an alternative to the urban concept: a Spyder with a flat window strip wrapping around the cockpit and doors that open upward at an angle.

The outer skin of the show cars is made of carbon fiber-reinforced polymer (CFRP); the occupant cell is a mix of CFRP monocoque and an aluminum structure. This ultra-lightweight construction is the foundation for the technology study’s low curb weight of 480 kg (1,058.22 lb).

Wishbones made from a combination of aluminum and CFRP locate the free-standing, 21-inch wheels.

Manufactured using cladding technology, the 21-inch wheels are very light and feature a variant of the blade design from the Audi e-tron models. The tire sizes are as unusual as the car as a whole – 125/60 up front and 145/50 in the rear.

The Audi urban concept uses pushrod technology borrowed from motorsports. As in a racecar, the struts mounted in the interior of the monocoque are nearly horizontal. Four disc brakes provide the stopping power. The turning circle measures less than nine meters (29.53 ft)—ideal for a city car. Thanks to the vehicle’s low weight, the rack-and-pinion steering does not require any power assistance. Crumple zones in the front and rear plus two airbags provide for a high degree of passive safety. An innovative assistance system helps the driver to avoid collisions with pedestrians.

The battery is mounted transversely behind the seats. The lithium-ion battery, which weighs around 90 kilograms (198.42 lb), stores 7.1 kWh of usable energy. The study’s two electric motors together produce 15 kW (20 hp) of continuous power and 47 N·m (34.67 lb-ft) of torque. The motors are mounted between the rear wheels, which they drive via a single-speed transmission.

Audi Wireless Charging
Audi is hard at work on the future of charging technology as an alternative to the charging at a power outlet. Audi Wireless Charging (AWC) refers to contactless induction charging. The infrastructure side, comprising a coil and an inverter (AC/AC converter), is placed on the normal parking spot of the Audi urban concept and connected to the power grid. The 3.6 kW primary coil set into the plate generates a high-frequency alternating field.

The charging process begins automatically when the urban concept drives onto the plate. The alternating magnetic field of the infrastructure side induces an alternating current across the air gap in the secondary coil, which is integrated into the vehicle. This current is rectified and fed into the vehicle’s electrical system, where it charges the battery or powers consumers such as the heater. The alternating field is only generated if the vehicle is standing over the plate and thus poses no danger to people or animals.

Charging stops automatically when the battery is fully charged. The driver can interrupt charging at any time. The efficiency of AWC is comparable to that of other charging technologies. It is not affected by rain, snow or ice. The new technology makes charging electric vehicles easy and extremely convenient. A later version of the technology will be able to be integrated into the transportation infrastructure as a retrofit for parking garages or residential streets, for example.