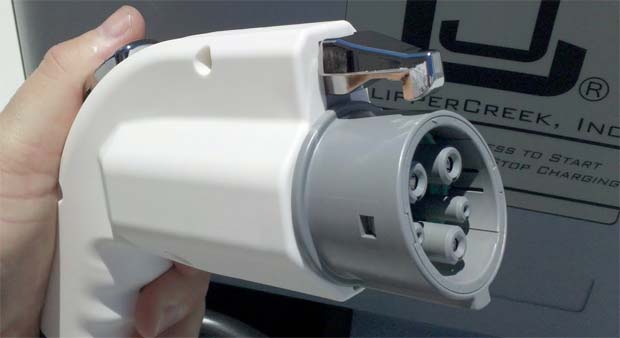 Two SAE International electric vehicle standards were among the first six standards added by The Smart Grid Interoperability Panel (SGIP) into its Catalog of Standards.

The standards, which gained approval by over 90 percent of SGIP members, reflect the high-priority national standards needed to convey the modern and energy-efficient power grid with seamlessly interoperable components.

The SGIP, a consensus-based group of more than 675 public and private organizations was created by the National Institute of Standards and Technology (NIST) to coordinate the development of U.S. Smart Grid standards.

•  J1772: SAE Electric Vehicle and Plug in Hybrid Electric Vehicle Conductive Charge Coupler – This standard describes the physical connector used to plug in an electric vehicle (EV), and it specifies such details as the dimensions, functions, and configurations of the vehicle inlet and mating conductor. Standardization of the connector allows EV operators to use the same charging equipment, reducing consumer costs and increasing consumer convenience and acceptance. This standard applies to charging from AC power sources, such as that presently available at a typical home or office building. This standard is currently being revised to encompass a new quick-charge DC connector which will reduce the charge time for electric vehicles from hours to minutes.

•  J2836/1: Use Cases for Communication Between Plug-in Vehicles and the Utility Grid – This standard describes the electronic information the vehicle will exchange with the grid during the charging process by establishing use cases for communication between plug-in electric vehicles and the electric power grid, for energy transfer and other applications. With the information made available by the adoption of this standard, utilities will be able to develop programs that enable consumers to charge their vehicles at the lowest cost during off-peak hours.

The Catalog of Standards will eventually contain hundreds of consensus standards and be an important source of knowledge for the entire grid community including utilities, manufacturers, consumers, and regulators.