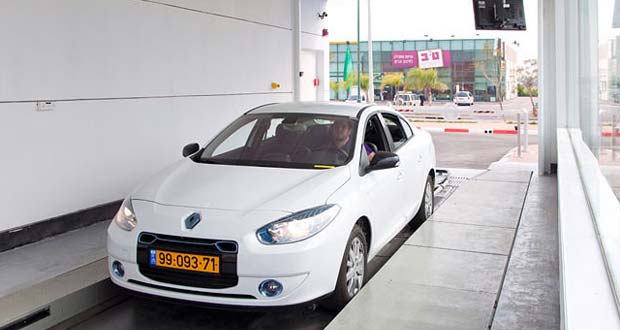 In preparation for commercial launch later this year, Better Place unveiled the company’s first Battery Switch station in Europe at an event in Gladsaxe, just outside Copenhagen, Denmark.

The station, which showcased the company’s Battery Switch technology, switching a Renault Fluence Z.E., is the first of 20 Battery Switch Stations to be deployed across the country over the next nine months as part of the company’s nationwide network of charging infrastructure that will launch later this year in partnership with DONG Energy and more than 45 municipalities.

Moreover, nine out of 10 visitors have said after the visit, that they are considering buying an electric car. Better Place and Renault will begin marketing the Fluence Z.E. later this fall.

The battery switch experience is a simple, fully-automated process that together with the Renault Fluence Z.E. gives drivers the autonomy of unlimited range. Customers simply swipe their membership card, which authenticates the car and subscription via the Operations Center to activate the switch. The rest of the process is automated, similar to going through a car wash, so the driver never has to leave the car. In just a few minutes, a robotic arm removes the depleted battery and replaces it with a full one and the driver is back on the road.

Denmark’s adaptability in terms of new climate friendly technology, a strong commitment to renewable energy, largely powered by wind and political leadership that has set ambitious carbon reduction targets makes it the perfect match for Better Place and the Renault Fluence Z.E.