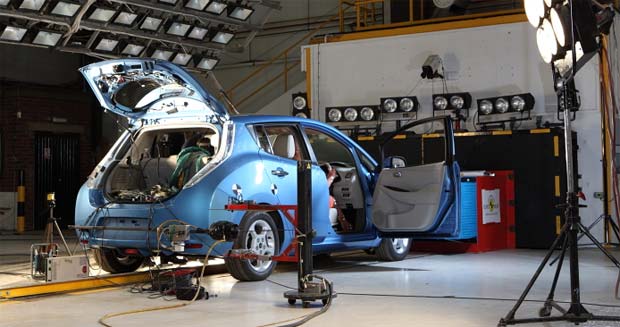 Nissan LEAF has been rated one of Europe‘s safest cars earning the maximum 5-star vehicle safety rating, according to the new independent crash testing results from Euro NCAP.

The Nissan LEAF earned an 89% rating for adult safety, an 83% rating for child protection and an 84% rating for its on-board safety assist systems, which include Electronic Stability Control (ESC) and a speed limiter as standard.

The all-electric LEAF also earned a higher-than-average 65% score for pedestrian safety, thanks in part to the low nose design and the comparative lack of ‘hard points’ under the bonnet.

Nissan LEAF’s safety assessment followed standard Euro NCAP procedure, with tests for frontal impact, side impact, side pole impact and whiplash. The car’s 48 lithium-ion battery modules, which are housed in a special compartment beneath the floor, completely withstood all the impacts. The EV’s battery system was switched on during the crash simulations to test the in-built safety measures of the electrical system, which includes automatic cut-off isolation in the event of an accident. The car passed those with flying colors, too.

The Euro NCAP result comes less than a month after Nissan LEAF earned a Top Safety Pick rating from the Insurance Institute for Highway Safety (IIHS) in the US and is the second five-star rating for Nissan in Europe this year.

In a first for the luxury hatchback segment, the CT 200h can be specified with an optional Pre-Crash Safety (PCS) system. This detects an imminent collision and primes the front seatbelts and emergency braking to reduce the risk of injury and damage. If an impact becomes inevitable, it will also automatically apply the brakes. Adaptive Cruise Control (ACC) uses the same millimeter-wave radar system as PCS to automatically maintain a safe distance from the car ahead.