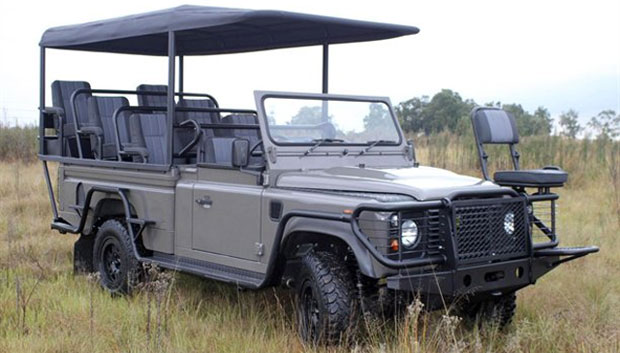 Land Rover South Africa and battery packs producer Axeon has made an Electric Land Rover Defender for use in the country’s game reserves.

The Defender’s 2.4-liter diesel engine has been replaced by a 28.8 kW-hr, 300V lithium-ion battery pack and an air-cooled AC induction motor with an output of 193 hp and 243 lb-ft of torque.

The Electric Defender speeds up to 37 mph with a range of about 60 miles or the equivalent of three times a typical game drive – around eight hours.

The battery pack has been placed in the engine compartment instead of under the floor of the vehicle, maintaining the Defender’s ground clearance and fording depth.

The Electric Land Rover Defender has also been tested to meet the high off-roading standards of the diesel-powered Defender.

The electric Defender has been launched as a concept vehicle at INDABA, one of Africa’s largest tourism events, held in Durban, South Africa, from 7th to 10th May 2011.[wzslider height=”400″ lightbox=”true”]