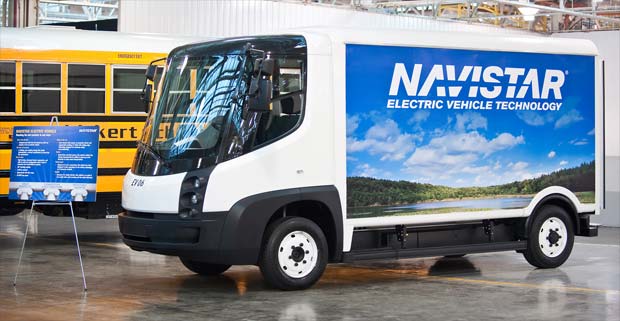 On the heels of announcing it had purchased the first fully electric small delivery vehicles, Canada Post today added the eStar electric trucks to its fleet.

The eStar electric truck, a Class 2c-3 electric truck and the first in its category, has a range of 160 kilometers (100 miles) per charge and can be fully recharged within 6 to 8 hours.

With zero tailpipe emissions, each eStar electric truck can reduce greenhouse gas emissions by as much as 10 tons annually. The windshield design provides nearly 180-degree visibility, the low-floor design allows easy loading/unloading and the noise level is nearly non-existent.

Unlike other electric trucks that are reconfigured models of fossil-fuel trucks, the eStar electric truck has been purpose-built for electric power, providing a competitive advantage with a low centre of gravity (the battery is between the frame rails, not mounted on top) and a 36-foot turning radius. The eStar is engineered with superior aerodynamics, a walk-though cab and a quick-change cassette-type battery that can be swapped out in 20 minutes, enabling around the clock operation. It is capable of carrying payloads up to two tons.

Canada Post has the largest delivery fleet in Canada – over 7,300 vehicles traveling more than 79 million kilometers a year. The company has made investments in researching and testing alternative technologies including ethanol, biodiesel, natural gas, propane, hydrogen, hybrids as well as electric vehicles to reduce the environmental impact of its fleet.

The eStar all-electric truck transitioned from concept to reality in August 2009, when President Barack Obama visited Navistar’s manufacturing plant in Indiana to announce $39.2 million in American Recovery and Reinvestment Act funds from the Transportation Electrification Initiative administered by the U.S. Department of Energy.