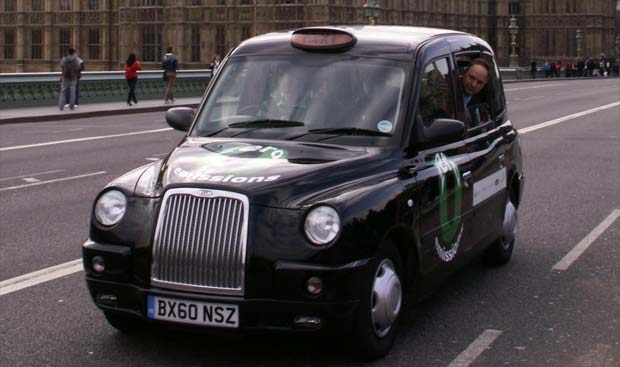 Intelligent Energy announced Monday that the Fuel Cell Black Cabs are on the roads of London for the first time since being awarded Road Legal status by the UK Vehicle Certification Authority (VCA).

The project to deliver a fleet of the zero emission taxis to the streets of London in time for 2012 is on track, with the first Fuel Cell Black Cabs covering a combined total of over 8,000 miles in road and test track testing conditions.

The zero emission taxis have been developed by a consortium, led by Intelligent Energy, which includes Lotus Engineering, London Taxis International and TRW Conekt with part-funding from the UK Government’s Technology Strategy Board.

The Fuel Cell Black Cab uses an Intelligent Energy fuel cell (30 kW net output) as a range extender for the 14 kWh lithium polymer battery pack, allowing the vehicle to operate for a full day without the need for refuelling. Powered by a 100 kW (peak), 55 kW (continuous) motor, the Fuel Cell Black Cab is capable of achieving a top speed of 81 mph and has a range of more than 250 miles on a full tank of hydrogen. Acceleration from 0-60 mph takes 14 seconds.

Now that fully functional, validated, proven vehicles have been produced, the consortium plans to push ahead with the delivery of a fleet to London in time for 2012.