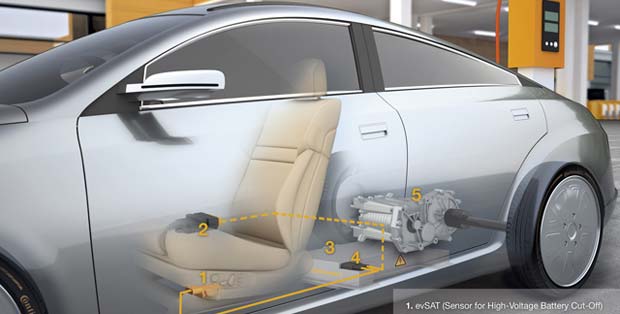 Continental has revealed details of a new sensor for electric and plug-in hybrid vehicles, which eliminates the risk of suffering an electric shock in the event of a collision while the vehicle is in charge mode.

The evSAT (Satellite for Electric Vehicles) sensor will go into series production with a major German vehicle manufacturer in 2012, according to Continental.

The evSAT sensor employs an algorithm to detect a frontal, rear or side collision with another vehicle and immediately transmits a signal via the CAN interface to the battery management system which then switches off the battery within half a second.

evSAT reacts in the same way if it detects a rollover in driving mode. In this case, the battery is deactivated within four seconds at most. In the event of other types of driving accident, evSAT remains inactive. In such cases, the airbag system assumes the task of cutting off the battery.

evSAT can be installed in a number of different places in the vehicle; it should, however, be placed sufficiently well inside the vehicle (beneath the front passenger seat, for example) to avoid being damaged in an accident.

Most high-voltage batteries in electric or plug-in hybrid vehicles generate a voltage of 400 volts, twice as great as the standard domestic plug socket and potentially fatal.

Already, in the USA, there is a legal requirement for the vehicle power supply voltage to fall to below 60 volts within five seconds of an accident occurring. No such laws exist yet in Germany.[wzslider height=”400″ lightbox=”true”]