The on-line electric vehicle is powered by electricity from an electrical charging strip planted about 5cm under the road surface.

The OLEV developed by the Korea Advanced Institute of Science and Technology (KAIST) is charged wirelessly over a 400-meter long stretch of electrical strip and runs an additional 400 meters on the charged battery. The special electrical strip creates a magnetic field that generates magnetic force. The magnetic force is sent wirelessly to the vehicle and converted into electricity, which is then used to power the vehicle. At the Seoul Grand Park, the OLEV will service a 2.2 kilometer-long circular route. 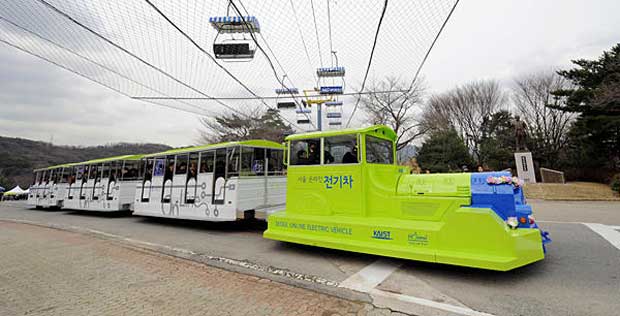 The Seoul Metropolitan Government made the decision to deploy OLEV at the Seoul Grand Park last August even as KAIST was developing the prototype of the electric vehicle. The first OLEV was built and the electrical strips were laid in January. Numerous safety evaluations and test runs to improve efficiency have been conducted since then.

The Seoul Metropolitan Government plans to introduce OLEVs as part of its public bus transportation system. With buses responsible for meeting about 30 percent of the transportation demand and median bus lanes in place in 25 areas totaling 90.2 kilometers, wirelessly charged electric buses are an attractive green alternative for Seoul.

The KAIST-developed OLEV is commercially viable because of the lighter battery required and because it does not require an extended standby time for charging. One of the achievements of the KAIST team is the highly efficient charging system despite the 13cm gap between the road surface and the vehicle. In fact, many countries have shown interest in the OLEV development as commercialization of similar vehicles failed in the United States and elsewhere.

Mar 16, 2010Blagojce Krivevski
Save $5,000 on an Electric CarRenault-Nissan Signs EV Partnership in Italy